More common refactorings that are available can be found here [2]. 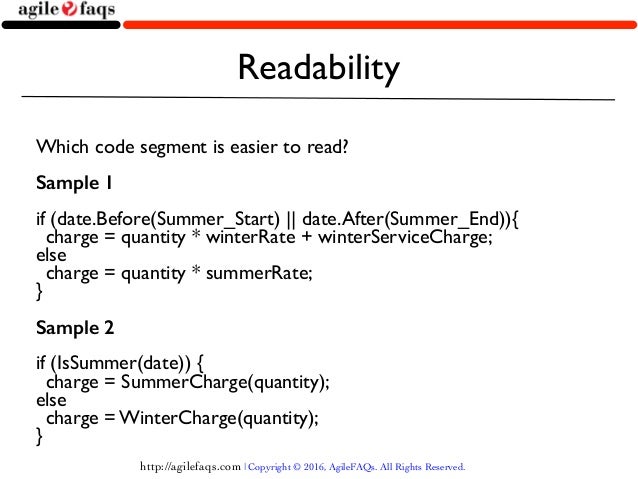 However, such code often takes on a life of its own, despite casual structure and poor or non-existent documentation. It works, so why fix it?

When a related problem arises, the quickest way to address it might be to expediently modify this working code, rather than design a proper, general program from the ground up. Even systems with well-defined architectures are prone to structural erosion.

The relentless onslaught of changing requirements that any successful system attracts can gradually undermine its structure. If such sprawl continues unabated, the structure of the system can become so badly compromised that it must be abandoned. As with a decaying neighborhood, a downward spiral ensues.

Since the system becomes harder and harder to understand, maintenance becomes more expensive, and more difficult.

Good programmers refuse to work there. Investors withdraw their capital. And yet, as with neighborhoods, there are ways to avoid, and even reverse, this sort of decline.

As with anything else in the universe, counteracting entropic forces requires an investment of energy. Software gentrification is no exception.

The way to arrest entropy in software is to refactor it. A major flood, fire, or war may require that a city be evacuated and rebuilt from the ground up. More often, change takes place a building or block at a time, while the city as a whole continues to function.

Systems and their constituent elements evolve at different rates. As they do, things that change quickly tend to become distinct from things that change more slowly. In more advanced cases, there may be no alternative but to tear everything down and start over. Some of these patterns might appear at first to be antipatterns [Brown et al.

Instead, they seek to examine the gap between what we preach and what we practice. Still, some of them may strike some readers as having a schizoid quality about them. So, for the record, let us put our cards on the table. We are in favor of good architecture. Our ultimate agenda is to help drain these swamps.

Where possible, architectural decline should be prevented, arrested, or reversed. We discuss ways of doing this.

In severe cases, architectural abominations may even need to be demolished. At the same time, we seek not to cast blame upon those who must wallow in these mires. In part, our attitude is to "hate the sin, but love the sinner". But, it goes beyond this. Not every backyard storage shack needs marble columns.

There are significant forces that can conspire to compel architecture to take a back seat to functionality, particularly early in the evolution of a software artifact. Opportunities and insights that can allow for architectural progress often are present later rather than earlier in the lifecycle.

A certain amount of controlled chaos is natural during construction, and can be tolerated, as long as you clean up after yourself eventually. Even beyond this though, a complex system may be an accurate reflection of our immature understanding of a complex problem.

This should not be the end of the story, though. As we gain more experience in such domains, we should increasingly direct our energies to gleaning more enduring architectural abstractions from them. The patterns described herein are not intended to stand alone.His Ph.D. thesis, Refactoring Object-Oriented Frameworks was the first in-depth study of code refactoring as a software engineering technique.

[1] After graduation Opdyke started his career at AT&T Bell Laboratories in , where he worked as researcher until John Brant and Don Roberts built the RefactoringBrowser for Smalltalk, and Don wrote a PhD thesis on it in Refactoring is not an XP-specific term at all, but has been rightfully adopted into XP like so many other best-practices in the field of software engineering and management.

At Drexel University, Prof. James Maginnis sparked my interest in many areas of computer science. At the University of Wisconsin, Prof. Randy Katz sparked my interest in computer science research. The first official thesis on the area of refactoring leads back to when Bill Opdyke finished his thesis on the topic "Refactoring Object-Oriented Frameworks".

Bill Opdyke was working in Bell Laboratories developing electronic switching systems. Cost: Architecture is a long-term rutadeltambor.com is easy for the people who are paying the bills to dismiss it, unless there is some tangible immediate benefit, such a tax write-off, or unless surplus money and time happens to be available.